This semester could be the last for an ultra-selective campus group at the University of Michigan that began early last century.

The 25-member organization, Order of Angell, is described by The Michigan Daily as "an exclusive senior honor society oft-criticized for its legacy of racism and its elitism."

It's in the news because of a three-page letter to Class of 2021 members, posted this week above the names of 10 past members, 10 other alumni and five current participants. "We believe that it is time to disband Order of Angell," they say. Its "positive values do not outweigh the immeasurable pain ... caused to members and to communities of color on campus." 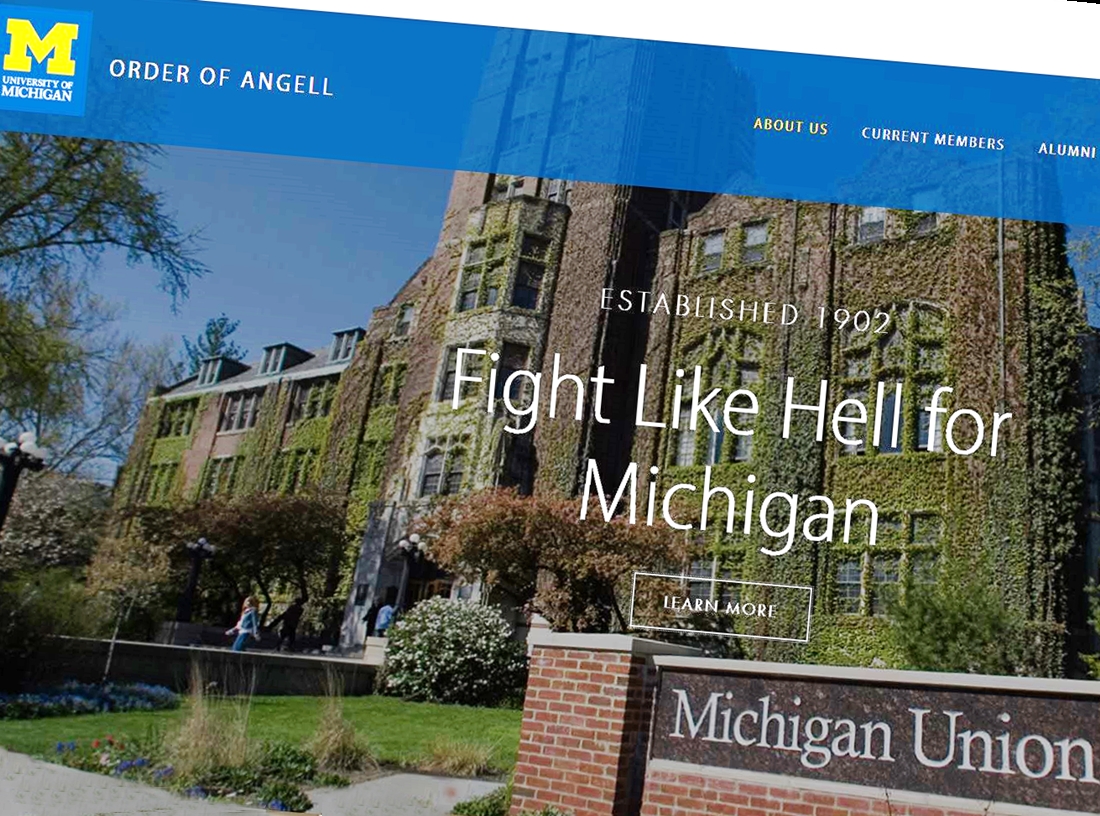 The group began in 1902 with the name Michigamua and the wearing of Native American-style regalia during initiations and other public rituals. It barred men of color until the 1940s and women until 2000. Cultural appropriation stopped in 1989 and the name changed in 2007.

The letter about possible dissolution says that while the restricted-admission society claims to champion diversity and inclusion, "being a person of color in the organization was both laborious and harmful." It adds:

Students of color often faced a hostile environment riddled with microaggressions and tokenism. Attempts to address these inequities were often met with silence at best and silencing at worst.

The power within the organization was always with white students, backed by a powerful cadre of alumni who pulled strings. ... Race-based aggression was assumed to have been limited to 'the past,' even while racialized power dynamics continued to shape the day-to-day of the organization. ...

We believe the most legitimate pathway to truth and reconciliation is disbandment ... True leadership embraces accountability and recognizes when a change of direction is necessary. 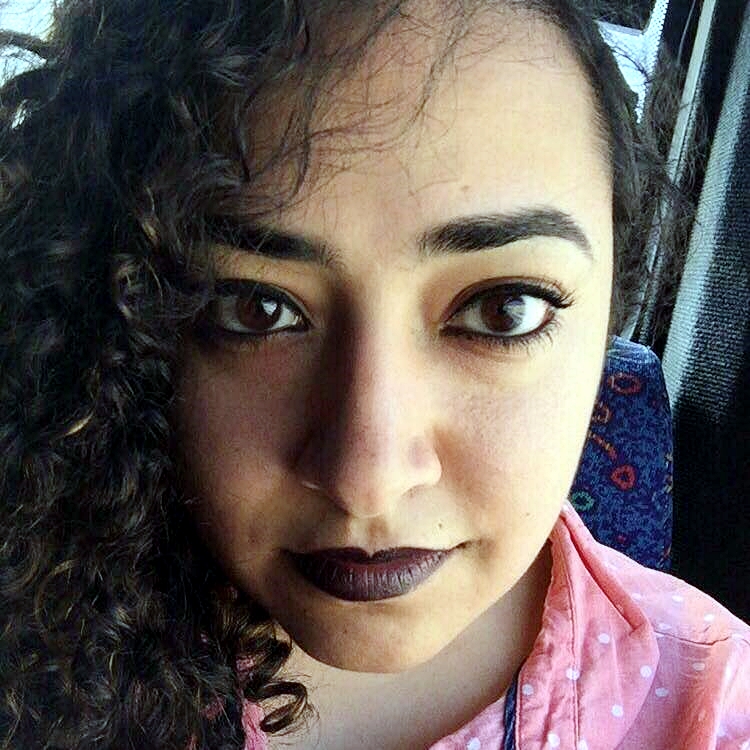 Eman Abdelhadi, Class of '12: "[The ] Order itself cannot be redeemed." (Photo: Facebook)

The "Dear Current Class" document, dated Feb. 22, is signed by 20 past members and "allies" who graduated from 2011-18, plus five seniors in what could be the final group. Current members decided earlier not to "tap" any prospective newcomers from among U-M juniors this spring.

One letter signer, past member Eman Abdelhadi, tells The Daily:

"A space can exist for leadership on campus that is not secret and that is not tied to this racist history. ... A lot of us feel like Order itself cannot be redeemed."

Abdelhadi, who earned a sociology degree in 2012, this year became a University of Chicago social sciences assistant professor.

Earlier this month, student managers of the campus paper voted "to prohibit any of The Daily’s editors from holding membership in Order of Angell," it reported this week.

This decision was made ... to denounce Order’s egregiously racist past.

As a news organization, The Daily aims for transparency and accountability of all public institutions. Order and other organizations like it, which bring together powerful student leaders from across campus and do not publicize their actions, are the antithesis of that. ...

Those outside the organization do not know what the group does and therefore are unaware of the true breadth of its influence. Despite former members’ denial of the organization’s secrecy and sway, it is clear that Order holds power on campus. ...

The Daily’s current leadership wants to begin rectifying damage by dissociating formally from Order and other exclusive senior honor societies on campus. We believe The Daily’s platform should not be used to further the agendas of already-powerful, historically problematic organizations such as Order. 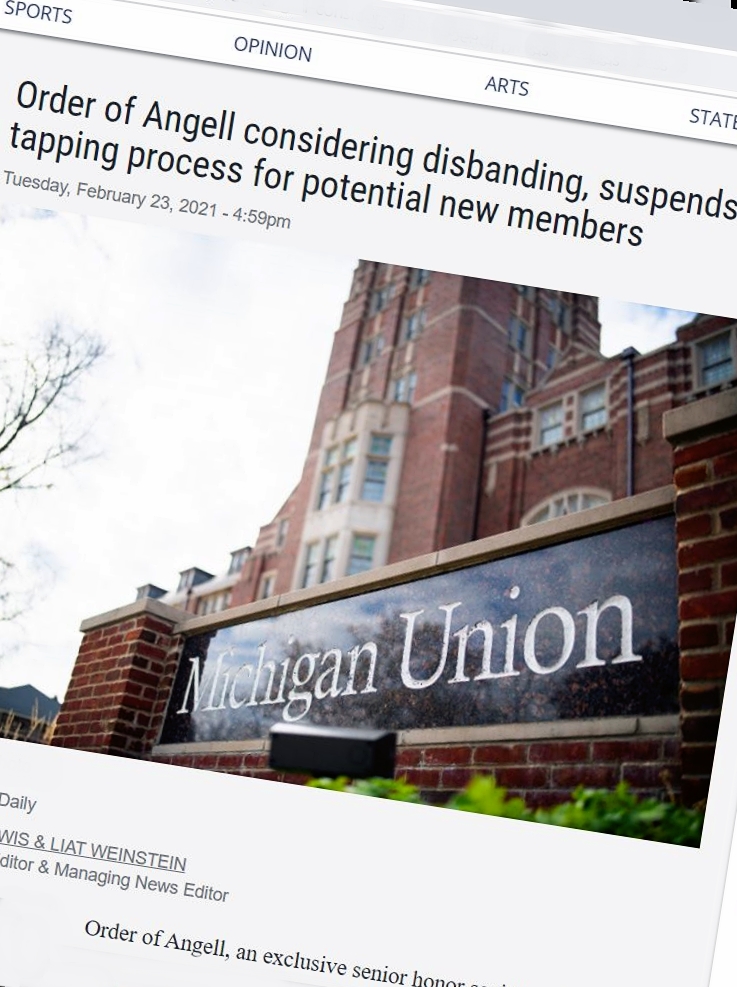 The new flare-up is the latest in a series. The Daily notes this week that "in 2019, multiple campus organizations condemned participation in Order due to the organization’s past appropriation of Indigenous culture and its elitism." An article that year in the campus paper provides backgorund:

The University banned Michigamua from using the seventh floor of the Michigan Union, its historical meeting space, in 2000 after native artifacts were discovered in the space and demonstrators occupied the area for 37 days. The University reinstated the group as a recognized organization in 2007 after losing the distinction in 2000, and the organization renamed itself as Order of Angell the same year.

Here's more from this week's letter to current members:

Students of color [admitted to the group] have had to be exceptional in their leadership, while many non-marginalized students are granted seemingly automatic memberships due to their association with so-called 'legacy' organizations. Although diversity membership, including the membership of women, increased, students of color remained tokens for the legitimacy of the organization and its value to the University community at large.