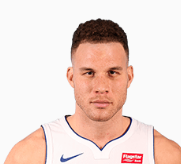 All-Star Blake Griffin, who played with the Detroit Pistons since 2018, is headed to the Brooklyn Nets, a team loaded with star power.

Griffin, 31, cleared waivers Sunday, two days after agreeing to a buyout from the last-place Pistons, a team going through a top-to-bottom rebuild.

The Nets, who are in second place, a half game out of first place in the NBA's Eastern Division, have All-Star Kevin Durant, James Harden and Kyrie Irving.

Griffin will have to check his ego at the door. For the first time in his career, he may not be a starter, and will need to battle the likes of Jordan, Claxton, Jeff Green, and Bruce Brown for minutes.

Griffin's passing will be useful, but his 3-point shot has fallen off since left knee surgeries in 2019 and 2020: He's shooting 28.1% on 3s, 66-for-235, in 38 games combined last season and this season. His spot-out shooting will be key, with him filling an off-ball role off the bench.

Griffin reportedly gave back $13.3 million of the approximate $56 million he was owed from the Pistons for the rest of this season and next season; he had a $39 million player option for 2021-22 he was sure to exercise. The buyout allowed him to go on waivers and become an unrestricted free agent when no team bid for him.