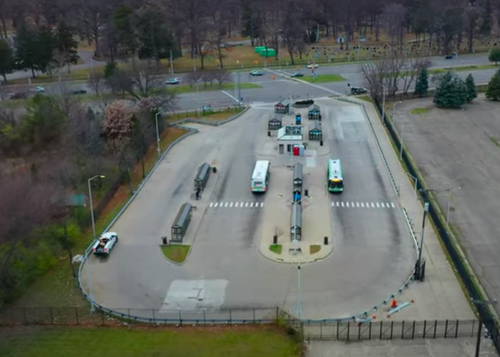 The existing transit center on Woodward at State Fair.(Photo: YouTube/LeightonGeoAerials)

When Detroit last year sold a developer the former State Fairgrounds for what community watchdogs say was less than market value, the public was told that, in exchange, the developer would pay for a new, $7 million transit center on site, replacing an existing one that has no indoor space for riders to wait.

But five months since the passage of the controversial deal, no one at the city can say for certain how much that center might cost if it exceeds the $7 million developer Hillwood Investments and the Sterling Group have committed.

Taxpayers will be responsible for remaining costs, should there be any. The city's main bus station, the Rosa Parks Transit Center downtown, was constructed more than a decade ago for $22.5 million.

The hold up, as reported Wednesday by the Free Press, is a study to see whether some historic buildings at the former fairgrounds can be put to use. Until that's known, a spokesman for Mayor Mike Duggan says a specific location cannot be determined, and thus, no site plan and cost estimate can be produced.

Money beyond the $7 million from the developer will come from existing Unlimited Tax General Obligation capital bonds, which are covered by property taxpayers. City Council has already given broad authorization for how those funds can be spent, meaning that while it may not have signed off on a transit center specifically, it may have authorized general transit infrastructure improvements. 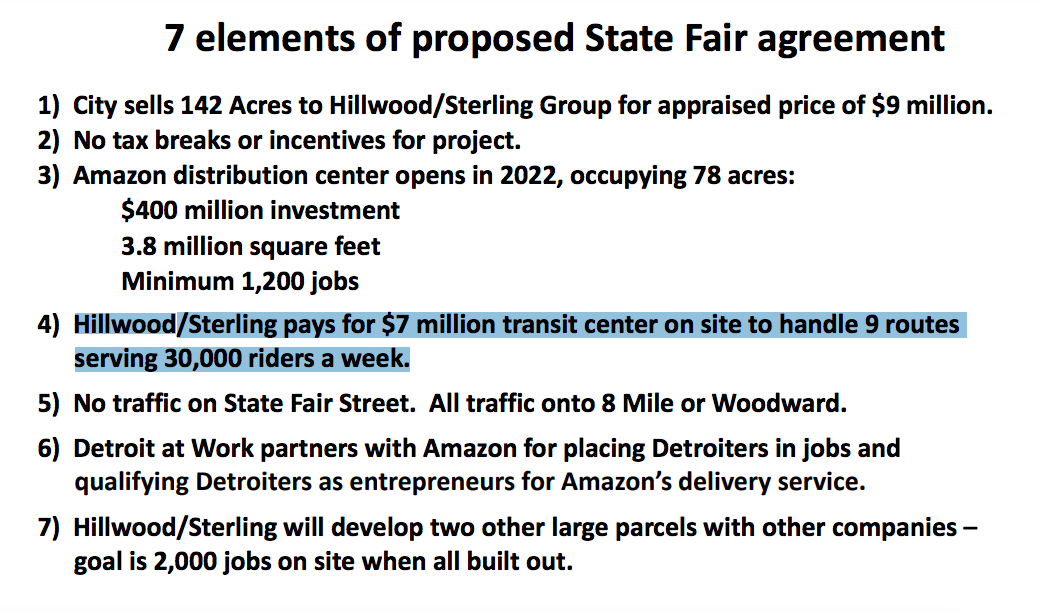 A city presentation from last August indicates the transit center will cost $7M.

The fairgrounds development, which includes a $400 million Amazon fulfillment center, has been mired in controversy. Opponents temporarily blocked the $9 million sale of the 142-acre site last fall via a lawsuit that alleged the city's property appraisal was too low, and thus amounted to a discount. Large projects receiving city incentives are subject to additional public input under a community benefits ordinance, but the state fair project has managed to escape that requirement.

The city has said the development will bring in an additional $4 million in tax revenue per year.