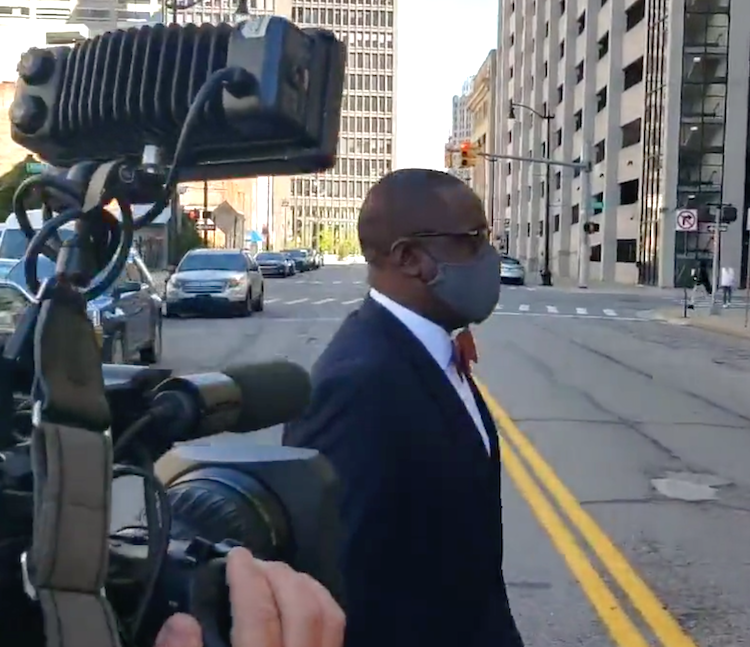 In a testament to the sad state of affairs of Detroit City Council, André Spivey on Tuesday became the second member to plead guilty to a felony in the past five months.

Standing before U.S. District Judge Victoria A. Roberts, Spivey, 47, pleaded guilty to taking bribes in connection with the City Council’s oversight of towing in Detroit.

The charge carries up to five years in prison, but the U.S. Attorney's Office indicated Tuesday that he's likely to face a sentence under the federal guidelines of between 37 and 46 months. Sentencing is set for Jan. 19.

The move will force him to resign. State law forbids politicians convicted of felonies involving issues of public trust from serving in state or local governmet for 20 years.

In May, Councilman Gabe Leland stepped down after pleading guilty to a state charge of misconduct in office for accepting a cash campaign contribution. He was originally charged with bribery in federal court, but the case was eventually transferred to state court where he pleaded to a lesser charge that helped him avoid prison time.

The plea on Tuesday comes as a cloud hangs over Councilmembers Scott Benson and Janeé Ayers and their top aides, whose homes and offices were raided by the FBI last month. Both are up for re-election in November and have not been charged in the ongoing investigation.

Elliott Hall, Spivey's attorney, said in July that his client had been cooperating with federal authorities for a year.

Authorities alleged that Spivey and an unnamed staffer accepted $35,900 from an undercover FBI agent and a confidential bureau source, authorities said.

On eight occasions between February 2018 and February 2020, Spivey or a staff member only identified in court records as “Public Official A,” accepted bribe payments in connection with towing issues pending before the City Council, the U.S. Attorney's Office said.

On Oct. 26, 2018, for example, Spivey met with the undercover FBI agent and the confidential source at the Side Street Diner in Grosse Pointe, and accepted $1,000 from each of them.

The payments were made to Spivey with the idea that he would assist with a proposed towing ordinance pending before the council, the feds alleged.

Another time, on Feb. 21, 2020, the confidential source gave $8,000 in cash to the staff member, and the FBI agent gave $4,000 "knowing that it was given for the benefit of Spivey and in exchange for Spivey’s assistance with towing issues pending before the City Council," authorities said.